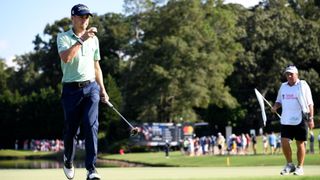 The curtain comes down on another US PGA golf tour season this week in Atlanta, with the Tour Championship at East Lake Golf Club. As ever, the tournament brings together the top 30 players on the US tour, who will all compete for one of the largest purses offered in golf. There’s a staggering £57m worth of prize money at stake this year, and you can see who walks away with the cash with a Tour Championship live stream - no matter where in the world you are.

Tour Championship 2019 - where and when

The action begins on Thursday, August 22, with opening pair Lucas Glover and Jason Kokrak teeing off at 11.45am local time (so that's 8.45am PT and 4.45pm BST for fans tuning in from the UK).

This year’s Tour Championship sees a major change of format, with the introduction of Starting Strokes rules. Each of the tournament’s 30 players have been assigned a score based on their position in the FedExCup league table following last week’s BMW Championship. This means Justin Thomas, No. 1 in points, starts the tournament at 10 under, No. 2 Patrick Cantlay starts at 8 under, and so on. The lowest five ranking players in the tournament all start the first round at even par.

Top-seed Thomas naturally goes in a clear favorite thanks to his shot advantage, but Brooks Koepka (starting on -7) and Rory McIlroy (-5) are both being well backed by pundits to make up their deficit.

It looks set to be a fascinating tournament, and one you can watch in full, no matter where you are in the world with our Tour Championship live stream guide.

Below you'll find full details on which networks are showing the Tour Championship in the US, UK, Canada and Australia.

If you're away from home country and looking to see the action you'll likely to find you won't be able to thanks to geo-blocking. Thankfully there's a way to alleviate that frustration. By using a VPN you'll be able to watch the game without having to resort to watching via an illegal feed from a dodgy website.

We've put all the major VPNs through their paces and we rate ExpressVPN as our pick of what's out there, thanks to it's ease of use and strong security features. It's also compatible with just about any streaming device out there, including Amazon Fire TV Stick, Apple TV, Xbox and PlayStation, as well as Android and Apple mobiles. So to get that home broadcast and stay safer online, ExpressVPN is our recommended option. Alternatively go for one of our other top three best VPN services listed below:

Once you've chosen and installed your VPN of choice, simply open the service's corresponding app, hit 'choose location', select the appropriate country and you'll be able to watch the broadcast as if you were back at home. It's an absolute cinch.

How to watch the Tour Championship 2019 in the US

If you're outside the US this week but want to access one of the above options, then you can use a US VPN to effectively transport your computer, phone or tablet's IP back to a stateside location.

How to watch the Tour Championship live: UK stream

If you're a UK-based golf fan, you'll be well used to this by now. Sky Sports has all the Tour Championship coverage on your side of the Atlantic. Head straight to the Sky Sports Golf channel where live coverage from the opening round begins on Thursday from 6pm.

Out of the UK this week? Then follow our instructions above to get a VPN and watch as if you were back in Blighty.

Cable channel TSN has the rights to show the TOUR Championship north of the border in Canada, and will be showing both the third and final round of play live. Like most other broadcasters these days, there's a TSN app for watching on your mobile or tablet as well.

How to get a Tour Championship live stream in Australia

Fox Sports has bagged the Tour Championship live TV coverage Down Under.  Australians can also live stream golf action via the Kayo Sports streaming service, which features no lock-in contracts and also includes access to over 50 sports, both live and on demand.