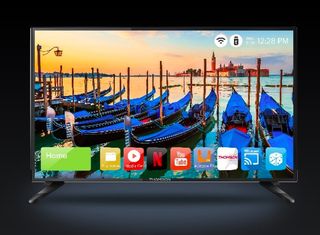 Thomson is looking to make a comeback by launching a new line of smart LED TVs that are set to take on other budget brands in the market like Xiaomi and Vu. The company has launched three models into the market, starting at Rs 13,490 for the 32-inch variant.

The other two variants have a 40-inch and 43-inch display and cost Rs 19,990 and Rs 27,999 respectively. They’ll be sold online exclusively via Flipkart and their sale starts today.

The main difference between the devices are the screens, arguably the most important feature of the TV. The 32-inch Thomson has a Samsung-made HD+ panel and the 40-inch TV has the same Samsung panel in FHD. The 43-inch variant has an LG-made 4K UHD panel with a resolution of 3840x2160.

Thomson hasn’t been around since 2005.

Super Plastronics (SPPL) is a Delhi firm responsible for bringing Kodak TVs in India, that have now taken the initiative to bring Thomson back into the Indian market.

Thomson is a French TV brand that was huge back in the eighties for their CRT television sets. Thomson is owned by Technicolor SA, France.

According to Avneet Singh, the CEO of SPPL, “With the launch, we aim to capture 6-7 per cent of the total TV market share and make Thomson the number one online smart TV brand in India.”

Substantiating that claim is the fact that the company has spent Rs 150 crore by way of investing in three manufacturing units in Noida, Una and Jammu to upgrade their facilities.

Competing against companies like Xiaomi and Vu, Thomson’s 32-inch variant is cheaper than Xiaomi’s 32-inch Mi TV 4A, which costs Rs 13,999.

Whereas, the 43-inch variant is substantially more expensive than Xiaomi’s, which costs Rs 22,999. Albeit, they both undercut Vu’s 43-inch Android 4K UHD TV, which costs Rs 52,000.