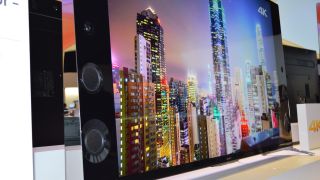 Sony has seen the future, and the future is 4K TVs.

At least that's the latest coming from Japan's Nikkei, which reports Sony is hanging up its boot straps on commercial OLED TV development for now and focusing full-throttle on 4K sets.

Sony apparently doesn't see demand for TVs equipped with the OLED displays taking off anytime soon, and rivals LG and Samsung are already dominating the space.

What's more, Sony 4K TVs look to be bringing in the bacon and may even take the company's TV revenues into the black next year. That would be the first time Sony hit positive TV revenue in 11 years, Nikkei notes.

The publication is definitive on Sony's move away from OLED, though there's no official comment from Sony contained in its report. We've asked Sony for confirmation on the decision to shelve OLED TVs and will update this story if and when we hear back.

According to Nikkei, Sony holds the lion's share of the global 4K TV market. With more than 20% of the value of all 4K TVs shipped in 2013, the Bravia X9-maker sees the opportunity to seize control of the 4K space.

Sony is slated to release eight 4K TV models this summer and hopes to quadruple 4K sales by the end of the fiscal year. The firm is so set on building its 4K offering, it's reportedly ready to make up to 50% of its total large flat-panel TVs with the ultra-high res screens.

OLED TV developers will reportedly switch to other areas, including working on 4K.