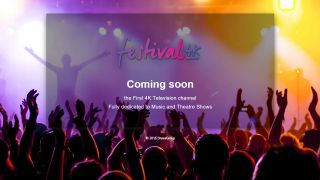 There have been 4K test channels running for some time, but test channels aren't particularly interesting. Now, a Dutch company will launch a channel with coverage of live music performances and theater performances.

The channel is also proper 4K, which means it has a resolution that's higher than most UHD TVs. It promises "at least 4320 by 2160" resolution while most UHD TVs are 3840 by 2160. There's also the promise of 8K video later, as the technology becomes more practical.

At the moment the channel broadcasts six hours per day, which is looped. The company behind it says that in 2017 that will increase to 24 hours, and next year it should be managing 12 hours per day of new material.

Sound is Dolby Digital in 5.1, which does feel a bit old-fashioned in some ways, especially given the massive advances of Dolby's Atmos in creating a much more vivid sound stage than you get with traditional channel-based setups.

Even ignoring Atmos, it would be pretty good to get 7.1 channel sound, as it's a huge upgrade, giving a much more encompassing sound stage.

It's not clear yet if residents of the UK will get access to the channel. It may broadcast on Astra, which would allow anyone with a TV directly connected to their satellite dish to tune it in. Sky may even offer the channel when it launches its own 4K service, but that's not likely to happen until much later in the year.