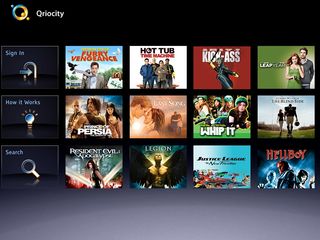 Qriocity - great to look at, hard to say

Sony has announced that its Qriocity VOD service is now available in the UK.

The portal not only has a name that would get you 66 in Scrabble if you land on a triple word score, it also offers hundreds of Hollywood blockbusters from all the big movie distributors.

Fox, Lionsgate, MGM, Paramount, Sony Pictures, Starz, Disney, Universal and Warner have all signed on the dotted line and will offer movies via connected Sony Bravia TVs or Blu-rays for the reasonable price of £2.49 - £3.49 if you want a new title.

The good news is that there will also be HD content available. This will set you back £3.49 and £4.49 respectively.

Qriocity was introduced by Sony back in September and it will eventually become an umbrella for most of Sony's on-demand content – from movies, to ebooks, to music.

Not to be outdone, Samsung and LG also announced new VoD content for their connected devices this week.

LG is bringing the BBC iPlayer to its connected TV service NetCast and has updated its Facebook and Twitter apps.

It is also offering movie service Acetrax, Google Maps and a number of online radio applications.

Samsung has announced that Acetrax has also arrived on its connected setups. The movie service was announced for its and Panasonic's TVs back in August but now the service has gone live in the UK.

It seems that the demand for on-demand is starting to pick up pace.