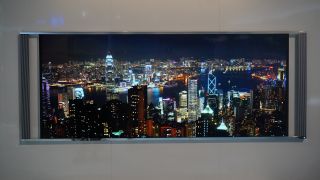 "Bigger is better" was the theme of CES 2014 when it came to 4K TVs. Almost every major vendor had an enormous Ultra HDTV to show off, and Toshiba was not about to be shown up. Take a gander at Toshiba's prototype for a 105-inch, 5K TV.

Toshiba calls this its "Extra Wide Ultra HD 5K" panel, packing an insane 5120 x 2160 resolution. The screen isn't curved, and it doesn't do any goofy bending tricks. This is a 105-inch panel with a 21:9 aspect ratio – just like the movie theaters.

The Japanese vendor went simple with this chrome-heavy concept design, with the aim to simply eliminate black bars completely. Note the thin speakers hugging each side of the screen, not to mention the lack of any stand. This 5K TV is destined for a wall mount.

Of course, no pricing or availability information has been disclosed by Toshiba. When or if this TV hits the market, expect to debate buying one of these or that new car.