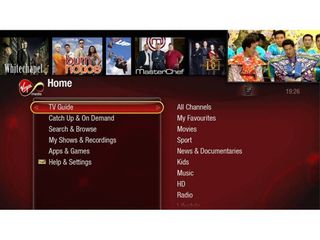 The decision to partner up with US PVR maker TiVo was huge news for customers of Virgin Media, with its current user interface showing its age.

The revamp is based heavily on the latest TiVo interface, boosted hugely by a more graphical look and built around finding content from any source more readily.

The colours, as you would expect, remain Virgin Media red, black and gold, with the TiVo logo present in the background.

TiVo did have a brief foray into UK territory but found itself pushed out by former-partner Sky and its Sky+ technology.

There is residual bitterness over this, and the US company will be keen for the Virgin Media tie-up to do well against the latest Sky+ HD boxes.

Search will play a major factor in the user interface, and you can rely on the fact that the TiVo 'thumbs up' and 'thumbs down' rating, which not only allows you to set your preferences but also to have the box automatically look for viewing patterns across its user base, will be present.

The final details on the box are thin on the ground, but expected to arrive in the coming week, with the first boxes set to arrive next month in order to meet the timeframe of a 2010 launch.