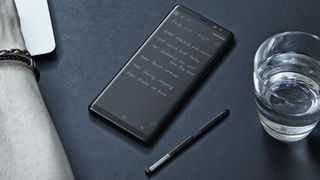 With the Samsung Galaxy Note 9 reportedly set to launch early on August 9, the leaks surrounding the upcoming business-minded flagship have kicked into overdrive. Now, OnLeaks and 91Mobiles  have teamed up to drop some very convincing renders (including a 360-degree video) of the device.

Applying the maxim of "if it ain't broke, don't fix it", the supposed Galaxy Note 9 renders show a very similar handset to its 2017 predecessor — albeit with some minor design improvements.

As expected, the Galaxy Note 9 has seemingly followed the Galaxy S9's example by moving its rear-mounted fingerprint scanner to below the camera sensor, making it easier to find while also avoiding unwanted smudges on the lens.

The camera area itself also appears smaller and more subtle than it did on last year's model, leading us to believe it may feature a similar array to this year's Galaxy S9 Plus.

Thankfully, it appears that Samsung has remained steadfast in its fight against the 'notchification' of smartphones, with the renders showing similarly classy (and maybe even slightly slimmer) top and bottom bezels to last year's Galaxy Note 8 — and it appears the 3.5mm headphone socket is sticking around, too.

We won't know for sure if these renders are accurate until the device is officially revealed, however, it's worth noting (heh) that OnLeaks has been on the money in the past.

In the meantime, you can check out the Galaxy Note 9's supposed design from every angle in the video below.