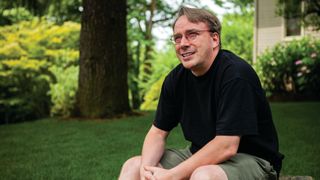 The Linux kernel is what everything else runs on top of, so it's the key to everything that a Linux device can do.

It's in your Android phone. It's in the computers that run the servers at Google, Amazon and all the other web services that we take for granted.

It powers the database that US immigration uses to decide if you are who you say you are, it's deep under the Alps searching for new particles at CERN, and it's even on unmanned drones searching for drugs traffickers in the Caribbean.

We at Linux Format were lucky enough to speak to Linus Torvalds, the man who wrote the original Linux kernel and still works as its maintainer.

We went to his house, we stroked his dog, we almost killed his wife in an embarrassing car crash, but despite that socially awkward automotive incident, he didn't seem overly annoyed by our presence.

Although he could have been rich beyond the dreams of most (and he could still use his position as kernel maintainer to make potloads of cash), he's more concerned with putting food on the table and a roof over his head.

Instead of buying a Hawaiian island or an enormous yacht, he's happy arguing with people on the internet.

And instead of getting his Google Nexus 7 delivered by helicopter straight from Google HQ (he did write the guts of its operating system, after all) he has to sit at home all day and wait for the postman to turn up, just like everyone else.

Thanks Linus; we love your work...

Linus Torvalds began work on Linux around April 1991, but he didn't announce it to the world until 25 August 1991, when he sent this message to the comp.os.minix Usenet newsgroup:

Hello everybody out there using minix - I'm doing a (free) operating system (just a hobby, won't be big and professional like gnu) for 386(486) AT clones.

This has been brewing since april, and is starting to get ready. I'd like any feedback on things people like/dislike in minix, as my OS resembles it somewhat (same physical layout of the file-system (due to practical reasons) among other things).

I've currently ported bash(1.08) and gcc(1.40), and things seem to work. This implies that ''ll get something practical within a few months, and I'd like to know what features most people would want.

Any suggestions are welcome, but I won't promise I'll implement them :-)

Linus (torvalds@kruuna.helsinki.fi) PS. Yes' it's free of any minix code, and it has a multi-threaded fs.

It is NOT portable (uses 386 task switching etc), and it probably never will support anything other than AT-harddisks, as that's all I have :-(.

Minix is another Unix-like operating system. It was created by Andrew S Tanenbaum in 1987, but was made available only for use by universities.

Linus was a Minix user, but found it had limitations. It was designed to work on 16-bit processors, so wasn't adapted well to the 32-bit instructions on the increasingly popular Intel 386 processors.

So, Linus set about creating a Minix-like operating system that would let him take advantage of the extra features it provided.

Another striking feature of this message is how low and humble his expectations were.

Linus never set out to change the world, and he just wanted to make something cool that would be useful to him.

Choice is good - or so the free software mantra goes.

But choice leads us to RPM vs Debs, to a proliferation of desktop options, and to the internet being clogged with hundreds of practically identical Ubuntu respins.