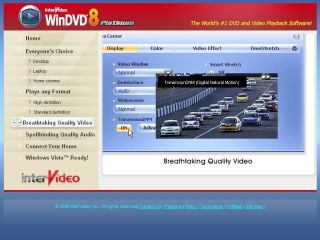 The licensing organisation behind HD copy protection has moved to prevent further hacks to Blu-ray and HD DVD discs. The Advanced Access Content System ( AACS ) Licensing Administrator has taken action to "expire the encryption keys associated with the specific implementations of AACS-enabled software".

The main software in question is InterVideo 's WinDVD, which has been hacked and used to copy HD discs during recent months. The hackers managed to attain several 'Title' keys in January that enabled the protection to be cracked. The keys were published on the internet. A further breach occurred in February when another key appeared on the internet.

At the time of the first attack AACS said it was "using all appropriate remedies at its disposal to address the attack." Owners of WinDVD - and other software-based players - will have to download a free update to continue to play HD DVD and Blu-ray content.

Now the leaked keys will no longer be able to be used to rip content, but it passes the challenge back to the hacking community which is sure to try out further ways of parsing the keys from the HD discs.

Corel , who owns InterVideo, announced the update in a statement on its website. "Our decision stems from recent reports that hackers have illegally obtained certain software licensing keys and have used them to duplicate copyrighted content without prior authorization.

"Corel takes this situation very seriously. We have been working closely with our partners and other industry organizations to ensure we take the steps necessary to prevent copyright infringement from happening in the future," continues the statement.

Updates to the OEM software will come via the PC drive manufacturers. Software that's not updated will no longer be able to play the content.