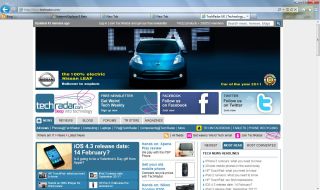 Microsoft has issued a critical security update for all versions of Internet Explorer that prevents attackers taking control of a PC.

The bulletin explains that CVE-2105-2502 has the potential to allow a remote code execution if a user stumbles upon a specially crafted website inside Internet Explorer and those that have activated full administrative user rights are most at risk.

The update patches up the problem by changing how Internet Explorer handles objects in memory and will be welcomed by the millions of internet users that still count Microsoft's browser as number one.

Legacy systems that have yet to upgrade to Windows 10 are missing out on Microsoft Edge, the new browser that will be at the centre of things going forwards. Internet Explorer can still be used on Windows 10, however, Microsoft is trying to wean its users off the browser and over to Edge, which has a range of new features and isn't affected by this vulnerability.

Microsoft is delivering the critical IE update via its automatic Windows Update facility for those that have automatic updating turned on and for everyone else it can be downloaded right here.