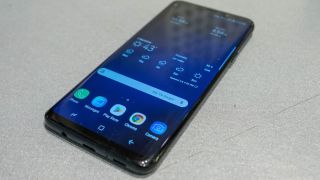 We’ve now seen the Galaxy S10 range leaked in a variety of colors, but while we’d heard that there might be a ceramic white version, we’re only now seeing renders of it.

Shared by MySmartPrice, the shade (which you can see in the images below) if anything looks fairly plain, especially compared to the pearly Prism White shade that had previously been leaked and is expected to also be offered.

But that’s not to say it looks bad. It’s a pure, bright white and apparently called 'Luxurious Ceramic White' if you want to give it its full name. Although not currently clear it's possible that this ceramic shade will feel different too.

However, it’s set to be fairly exclusive and very expensive, as this color will apparently only be available on the top model of the Samsung Galaxy S10 Plus – one with 12GB of RAM and 1TB of storage.

This top model is also thought to be offered in Prism Black, while this source says that the cheapest version, rumored to come with 6GB of RAM and 128GB of storage, will be available in Black, Green, White, and Blue colors.

The middle model with 8GB of RAM and 512GB of storage meanwhile could land in Prism Black, Green, Pearl White, and Blue colors.

Of course, all of this remains rumors for now, but this close to launch it’s likely that the rumored colors and availability of said colors is more or less accurate.