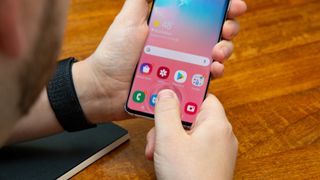 As security flaws go, a fingerprint scanner that will unlock a phone for any unregistered print is pretty serious – and that’s exactly what seems to be happening with the Samsung Galaxy S10.

Okay, there’s a bit more to it than that. The fingerprint scanner can only be fooled once certain screen protectors are applied, and only seems to be fooled by thumb prints – but even so, it’s cause for concern.

The issue was discovered by a British woman who, speaking to The Sun, said she applied a cheap screen protector and found her unregistered thumb print would then unlock the phone. Her husband was apparently able to do the same with his thumbs, and testing the screen protector on a relative’s phone led to the same issue.

It’s not clear whether other Samsung phones with in-screen scanners have this issue, nor how many brands of screen protectors can confuse the scanner in this way, and how many people are therefore walking around with completely compromised biometric security.

But it’s still a concern, especially as you wouldn’t even need to be using a screen protector yourself to have compromised security. All it would take is for a thief to have access to an applicable screen protector.

Thankfully, a fix is on the way. The BBC reports that Samsung has acknowledged the issue and promised a software patch to fix the problem. It’s not clear exactly when this fix is coming, but in the meantime you might want to disable fingerprint security – or at the very least make sure you’re not using a screen protector that affects it.