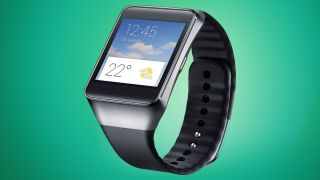 Samsung wants some more of the wearable action

Samsung has followed in the footsteps of the LG G Watch and Motorola Moto 360 and produced its own Android Wear smartwatch dubbed the Samsung Gear Live.

Revealed at the Google IO conference in San Francisco, the Samsung Gear Live slides in alongside the Tizen driven Gear 2, Gear 2 Neo and Gear Fit wearables.

You'll be able to order the Gear Live on the Play Store later today and eventually in Samsung Retail Stores. There's no word yet on price.

The Gear Live watch features a 1.63-inch Super AMOLED display designed for colour and screen clarity. It will have customisable clock faces and utilize one-touch wake up for instant access.

On the processor front, it's equipped with a 1.2GHz chip. The Gear Live laps up 512MB of RAM and 4GB of internal storage. It is Bluetooth 4.0 LE capable (necessary for mobile device connectivity) and features an accelerometer, gyroscope and compass.

The smartwatch is dust and water resistant and houses a heart rate monitor that works with several fitness apps, meaning that hike you took on the dusty trail won't go unrecorded.

The band is a standard 22mm strap and users can choose either a black or 'Wine Red' colour option.

Several apps, including ones of the fitness variety, are compatible with the Gear Live. Users can post to social media via apps, chat from messaging apps and get notifications when they're out shopping, wanting to stay up on the news and more.

Voice commands are supported, so saying, "OK Google" and asking questions about things like flight times, checking game scores, sending a text, calling a taxi, setting an alarm or making a restaurant reservation are doable with Gear Live.

The Samsung Gear Live works with any Android device running Android 4.3 and up.