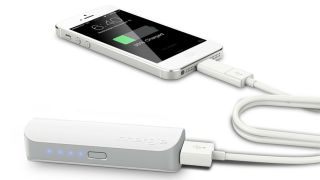 Do you ever feel like you spend your whole day worrying about battery life? Between a camera, laptop, smart watch, fitness tracker and mobile phone, the average technology enthusiast has to charge at least five devices on a regular basis - often more.

What's worst is when something runs out of battery and you've got a fully-charged device sat right next to it, with no way of transferring that power from one to the other. But researchers at the College of Information and Computer Sciences at the University of Massachusetts Amherst have come up with a solution to this oh-so-first-world of problems.

They've developed a system that can allow small mobile devices to take advantage of battery power in larger devices nearby for communication. It's called "Bradio", short for "braid of radios", and can extend battery life hundreds of times in some cases.

"We take for granted the ability to offload storage and computation from our relatively limited personal computers to the resource-rich cloud," said Deepak Ganesan, who led the research. "In the same vein, it makes sense that devices should also be able to offload how much power they consume for communication to devices that have more energy."

At the Association for Computing Machinery's special interest group on data communication (SIGCOMM) conference in Florianópolis, Brazil, the team presented a paper showing how it works.

It's essentially a jazzed-up version of Bluetooth, except that the receiving device spends energy to get data off the sending device, rather than vice versa - a bit like an RFID chip. As receiving devices tend to have bigger batteries than senders, this makes a lot of sense.

For example, when a fitness tracker wants to send its data to your phone, the phone does most of the work instead of the tracker - extending the tracker's battery life considerably.

"To be clear, our results only cover the cost of communication or transmitting data," said Pan Hu, who contributed to the research. "If a radio is transmitting from a camera that consumes hundreds of milliwatts while using its sensor, clearly the sensors may dominate total power consumption and reduce the benefits of optimizing the radio."

The system is built so that it only kicks in in low-power situations, allowing it to operate just like normal Bluetooth when a device's battery is still at a healthy level. With further optimisation, the team reckons it'll be able to get it to a point where it's small and efficient enough to be used in mass-market manufacturing.

But ultimately, Ganesan and his colleagues have their sights set on the future, rather than the present. "Wearable devices are often bulky due to large batteries needed for adequate battery life," he says.

"Perhaps such energy offload techniques can reverse this trend and enable thinner and lighter devices."