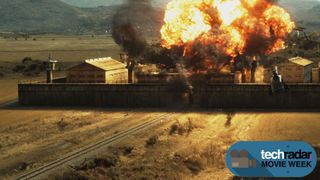 In 2004, before personal action cameras were considered a class of consumer photography products, a little startup called GoPro released its first waterproof disposable-like camera that used a 35mm roll of Kodak film. That 35mm GoPro sold over US$150,000 in the first year, and the company's focus on affordable consumer-priced action cameras has not only driven its sales figures to double every year since, but, more than ten years on, the devices have also fundamentally changed the way audiences interact with extreme sports.

In many ways, the early days of the consumer drone industry are similar to those of the action camera industry. Apart from the fact that many consumer drones actually use GoPro devices as the included modular camera, the types of footage drones can capture is fundamentally different to anything emerging from first-person action cameras and land-based cinematography. Drones are forging a new frontier of cinematography, and starting to hit a price point that makes them appealing to a broad audience.

In March this year New York hosted the world's first drone film festival, which accepted entries on the proviso that at least 50% of the footage was shot using an Unmanned Aerial Vehicle (UAV). Randy Scott Slavin, the man behind The New York City Drone Film Festival, even said in the lead-up to the event that drones would be an important part of every film set of the future.

The LA-based band OK Go won one of the categories at the festival with a clip that featured the band members riding Honda's unusual UNI-CUB Segway-like seats, in an intricately choreographed modern dance routine filmed by a multi-rotor drone.

This sat alongside other category winners including drone pilot Daniel Ashbey's cinedrone showreel of exceptional footage of big wave surfing, professional skiing and mountain bike riding that captured the intensity of each activity while showing off the drone's freedom to simultaneously explore the beauty of the surrounding environment.

The competition had eight categories, and although each of the winners are outstanding in various ways, the competition had a distinct edginess that emerged from a range of unique new camera angles, giving the clearest indication yet of how big an impact drones will have on the future of film.

The reason drones have not been integral to every Hollywood movie's aerial shots in the past few years is not because studios are unaware of their potential, but because the US has had a blanket ban on any use of drones for commercial purposes in place since 2011.

In September of last year, however, the Federal Aviation Administration finally got around to giving six exemptions to drone filming companies, and the first films to capitalize on this are only just starting to appear in cinemas and on streaming services.

Some of the films on this list are just hitting cinemas now and others – filmed in countries with less stringent drone laws – have been out for some time, but together they make a pretty strong case for the competency of this still-maturing method for capturing film.