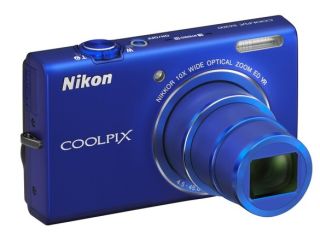 The 6200 is the smallest of the two, with Nikon branding it an ultra-compact. Despite its size though, there's some meaty features on the camera, including a 16MP CMOS sensor and 10x wide-angle zoom lens.

There's also a smattering of effects on board, just in case you get a little bored with how mundane real life looks. These effects include: Soft Focus and Nostalgic Sepia and also image enhancements in the form of Cross Screen, Fisheye and Miniature Effect.

The Nikon Coolpix S8200 comes brandishing a 14x zoom wide-angle Nikkor lens and is equipped with a 16-megapixel back illuminated CMOS image sensor.

As with the S6200, the S8200 has video capabilities but instead of 720p, the quality has been ratcheted up to Full HD 1080p. There's also some stereo sound on board.

The Nikon S8200 UK release date is 22 September and comes in four colours: black, red, silver and white. Price-wise, it will set you back £279.