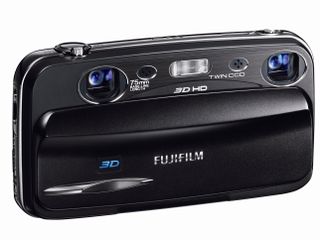 Fujifilm has announced the arrival of the FinePix Real 3D W3 camera, an update to the company's W1 range.

The FinePix W1 was the world's first 3D camera when it was released back in September 2009, offering consumers the chance to shoot 3D images which could be played back through a 3D TV or sent off to Fujifilm to get printed on special lenticular paper.

The FinePix W3 is the next-generation of 3D cameras, one which still has the twin 10MP CCD sensors but has the addition of a new processing engine, called the Real Photo HD processor.

It also has the addition of a 3D AUTO shooting mode, which is pitched at novices looking to take decent three-dimensional shots.

Flip the camera over and there's a 3.5-inch LCD. This is made so that you can easily view your 3D images without the need of 3D glasses.

Other features include a 3x zoom, macro features and you can also use the camera as a conventional 2D snapper.

And there is an added bonus for those who want to send their images off to get printed on lenticular paper – Fujifilm is now offering this in the UK so waiting time will be a lot shorter.

UK release date for the Fujifilm FinePix Real 3D W3 is September and the camera will be priced at £399.

See the Fujifilm FinePix Real 3D W3 in action below.