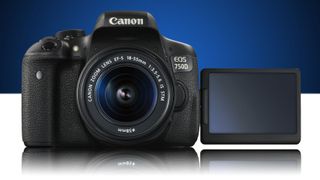 Canon's announcement of two new cameras is just one part of the story. The other is that they use a new 24-megapixel sensor, made by Canon, which features a new version of its Hybrid CMOS AF system.

This uses phase-detection 'focusing' pixels spread across the sensor to aid faster autofocus in live view mode and when shooting movies. This latest Hybrid CMOS AF III in the 750D and 760D has more focusing pixels arranged in a more regular array, and Canon says it's about 4x faster than version II (used in the EOS 100D) and two generations ahead of the original Hybrid CMOS AF system in the EOS 700D.

The 24-megapixel sensor is especially interesting because this gives the 750D and 760D parity with rival Nikon D-SLRs like the D3300 and D5500. It's also a sign that Canon could be pensioning off the venerable 18-megapixel CMOS sensor still used in the 700D and EOS 100D.

Round the back, they both have articulating 3-inch touch-screen displays with a resolution of 1,040,000 dots, and both cameras can shoot full HD movies at 30fps, 25fps and 24fps. They also feature Canon's new Flicker Detection technology, first seen in the EOS 7D Mark II, for more reliable exposures under artificial light.

So what's the difference? It's all about the design rather than the features. Both cameras will be part of Canon's entry-level EOS line-up, but they're aimed at different kinds of user.

The EOS 750D is aimed at beginners who want the reassurance of automatic modes and simpler controls of the kind they might be used to on a compact camera.

The EOS 760D, however, is designed for enthusiasts who want more creative and manual control. This is the one to choose if you already know the basics and want to move on.

There's little difference in the size and weight, but the 760D swaps the mode dial over from the right side of the camera to the left to make room for a mono status LCD. This displays key shooting information in a clearly visible way without the need to check the more power-hungry LCD display on the back.

The 760D also has a second control dial on the rear of the camera. This makes it changing key camera settings much quicker, especially when shooting in the semi-automatic or manual modes where you want to adjust the shutter speed and lens aperture independently.

Canon says that they're additions to the Canon range rather than replacements, and they they are designed to slot in between the EOS 700D and EOS 70D.

Putting aside any potential bafflement over which model to buy, and why there are two at all, the EOS 750D and 760D do represent a real step forward, with a newer, higher resolution sensor and much improved autofocus – we look forward to giving them a proper test.