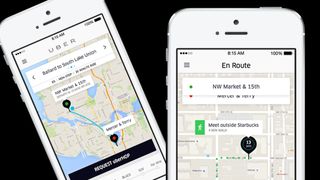 Uber announced today that it is trying out two new programs to reduce traffic while you commute. The ridesharing service revealed uberHOP, which allows Uber drivers to operate similar to a bus route, and uberCOMMUTE, which could compensate non-Uber drivers for giving people a lift.

Starting this Thursday in Seattle, WA, Uber claims uberHOP will help reduce traffic congestion in major metropolitan areas by "getting more butts into the backseats of fewer cars."

The way customers use uberHOP is similar to ordering a normal Uber pickup. The key difference would be that the drive concurrently takes on other rides along a defined route, similar to a bus or metro system.

Uber believes uberHOP could solve transit issues by broadening the use of public transport without the need to construct an entirely new infrastructure.

"Investment in mass transit is an important part of the solution," said the company in an official announcement. "But it's expensive and not everyone lives within walking distance of the subway or a bus stop."

Another pilot program undergoing trial by Uber, uberCOMMUTE, plans to give everyday commuters a chance to make a few bucks on the way home. The program would allow anyone with the app (in addition to a clean driving record and valid license) to pick up riders on the way home, garnering fare while on the go.

uberCOMMUTE will be tested in Chicago, IL during the workweek from 6am to 10pm. This aims to replicate what Uber calls "casual carpools, or slug lines," where riders sign up to find carpool partners online, similar to a want ad. This sort of system has already taken off in several cities, as it minimizes travel costs, pollution, and the number of vehicles on the road.

Uber chose Chicago as a testing ground for uberCOMMUTE due to the nearby I-90 freeway, which it claims hosts the nation's worst case of bottleneck congestion, estimating nearly 17 million hours per year wind up wasted stuck in traffic.