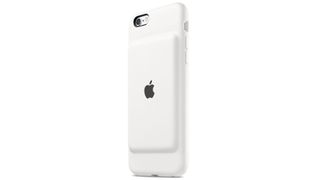 Earlier this week, Apple revealed the iPhone 6S and iPhone 6 Smart Battery Case, which many saw as an admission by the company that battery life on its flagship phone wasn't up to scratch – but according to Tim Cook that's not the case.

Apple's CEO insists the case isn't designed for everyday use, but is intended for keeping your iPhone charged on longer trips.

Speaking to Mashable, Cook said "if you're charging your phone every day, you probably don't need this at all. But if you're out hiking and you go on overnight trips… it's kind of nice to have".

People have criticised the design of the new battery case and some are calling it one of the ugliest products Apple has released.

That design is a highlight for Cook, however. Pointing out the way the battery pack curves down on the back of the phone, he said "in order to get it on… you'd find it very difficult to get it on and off. So the guys had this great insight to put the bend in along with making it a smart case".

If the new case isn't an implicit acknowledgement that battery life in its latest phones isn't up to scratch, it appears that Apple doesn't think there's a problem. But iPhone fans will be hoping for improved battery performance in the iPhone 7.