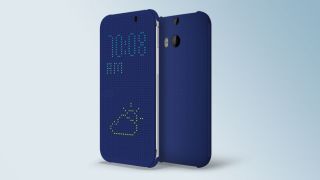 Perhaps the only thing it hasn't got going for it is the waterproofing qualities sported by the Samsung Galaxy S5 and Sony Xperia Z2, which means to feel super-safe you need extra protection for this brilliant smartphone.

Of course, keeping it free and fresh makes sense: it's one of the most beautiful handsets around, so why would you imprison it in a bulky case?

But if you must keep your HTC One M8 looking good and safe from breakages then you'll need a case. So here's a list of some of the best cases you can get for the HTC One M8.

The people who made the phone are in as good a position as anyone to knock up a top-notch case for the HTC One M8, and that's exactly what HTC has gone and done with the Dot View Case.

Fashioned from hardwearing plastic and soft-touch rubber the Dot View Case not only brings a splash of retro styling but also works in conjunction with the HTC One M8 to bring users weather, time and notifications in an incredibly cool way.

The phone's screen pushes out these notifications in such a way that they appear as old-school dot-matrix displays through the many dots punctuating the front cover. The only downside is it can be hard to actually use the phone if you wrap the front flap right round, as it sticks out a little.

But you can even use motion gestures for things like waking the device when the screen is covered too. Impressive.

OtterBox certainly knows its industry. It has been knocking out impressive protective cases for mobile devices since 1998, the latest of which is an addition to the firm's popular Defender Series for the HTC One M8.

The Defender case has a synthetic rubber outer slipcover to protect from drops and bumps and a two-piece internal shell with foam padding for shock absorption. This chunky yet stylish case is perfect for those whose jobs involve a bit of rough and tumble.

The case also features an integrated screen protector that saves the 5-inch SLCD display from a battering but which doesn't hamper touchscreen sensitivity, as well as a handy belt-clip holster that doubles as a kick-stand.

One for the extremely butterfingered, US accessories manufacturer Speck's CandyShell Grip Case is laden with rubberised ridges across its rear panel to prevent slippage from perspiring paws.

This one we feel is aimed more at those with a penchant for incessant texting and gaming, both of which are activities we've seen cause phones being flung from the grasp of their users.

There's no screen protection as such - just a cut-out to allow you to prod at the bare touchscreen and raised bezel to prevent the display from shattering if dropped.

But the rest of the device is enveloped in a hardwearing polycarbonate shell for 'muliti-layered protection'.

The CandyShell Grip Case allows the device's infra-red blaster to be used too as there's a little cut-out especially for the beams to escape.

If you want to show off the lovely brushed aluminium bodywork of the HTC One M8 then this case isn't for you. If you want to keep that bodywork intact without breaking the bank though, we'd highly recommend.

The Case Mate Barely There case comes in a clear version meaning that you can bask in the HTC One's metallic glory without worrying about messing it all up with scratches.

As the name would suggest, this smartphone protector is hardly noticeable and won't spoil your M8's looks. However, whilst this minimalist approach is to be applauded, you do wish that its creators had made it a little bit sturdier.

But if you like things minimal, the soft-touch outer isn't at all bulky and keeps the phone's slim line profile, and there's a bezel to prevent the display from being scratched by surfaces when you lay it down.

Drop it from anything more than table height though and this case probably won't save your pride and joy.

For just a little extra you can fix yourself up with another of Case Mate's creations in the form of the Naked Tough Case.

Offering rugged protection but still letting the HTC flagship's beauty shine through, this clear shell is an affordable option for those who don't want to hide their M8 away under an awful shell.

The Naked Tough Case is as straightforward as you like - no mod-cons such as kickstands or belt-clips here, just a svelte, translucent hardwearing cover.

As with the majority of the products covered here, there is a raised bezel around the cut-out for the display to stop it coming into contact with surfaces.

Where this two-piece snap-on case differs though is that it has a bumper around the perimeter edge for improved shock absorption should you drop the phone that's wearing it. Nice touch Case Mate.

Parisian style comes to mobile tech protection thanks to French luxury goods maker Noreve, although the firm's lush leather offering may be a bit on the pricey side

But for that cash, it doesn't half look and feel nice. Well-crafted seams and stitching lend this product an air of sophistication, and it's practical too with cut-outs for the camera module, volume rocker and connectivity ports, as well as the front-facing lens and speaker grille.

It has a nice amount of padding to protect your device, the lining is embossed with the Noreve insignia and you get to chose from 11 colours and no fewer than 14 different finishes.

This snap-on case is 'designed to protect all angles' and has shock absorption zones at the top and bottom edges, as well as each corner to do just that.

A sturdy effort without being overtly bulky, this case really does live up to its name with a dual-layer of protection comprising of TPU on the interior and a hard polycarbonate outer.

Much like the Naked Tough Case, the Spigen Slim Armour doesn't detract from the HTC One M8's aesthetics at all - it's 'form-fitted'.

Spigen has even gone so far as to treat the middle section of the case with a UV coating so as to prevent fading in the sun. Now if that isn't going above and beyond in terms of keeping your M8 from harm, we don't know what is.

You'd be forgiven for dismissing the NASA-eque name as marketing spiel but delve a little deeper and you'll discover that this chunk of phone armour actually features some impressive space-age technology.

You see, alongside a nice, matt-textured TPU outer-shell, the Tech21 Impact Tactical Case is packed full of something called D30.

The stuff itself is akin to the Silly Putty you might have played with as a kid and manifests itself here as a continuous bar around the perimeter of the case, both inside and out.

It's said to absorb the kinetic energy generated from a drop and disperse it evenly around the case, thus preventing breakage.

This video of the technology in use shows that it's good stuff to have in a phone case too, even if it does add about 1cm of girth to the profile of your device.