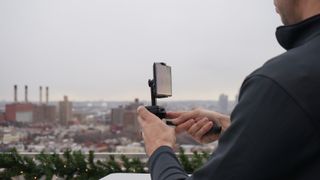 4K recording is set to get better with Snapdragon 810

Qualcomm has had its eye on making 4K a reality on mobile devices for a while now, but at an event at the company's San Diego headquarters to show off the prowess of its upcoming flagship mobile system on a chip, the Snapdragon 810, Qualcomm is confident that it has finally succeeded in its goal.

Although previous SoCs such as the Snapdragon 805 have allowed smartphones like the Sony Xperia Z3 to display and record 4K video, the highly anticipated Snapdragon 810 is set to bring improvements and new features that will make the process of recording, playing and sharing 4K content even better.

Tim Leeland, Vice President of Product Management at Qualcomm, proudly stated that not only is the Snapdragon 810 the "most advanced cluster of the most advanced processors we've ever made", but that Qualcomm has worked hard to "[make] improvements for the 4K end-to-end experience".

One of the areas Qualcomm concentrated on to improve the user experience of recording in 4K was to lower the skin temperature of any device that's running on a Snapdragon 810.

Not only does the lower temperature make it more comfortable for the owner of the device, it also helps improve stability and reliability, so hopefully no more annoying crashes caused by devices overheating when recording at ultra-high definition.

It also means Snapdragon 810 and its 4K capabilities will be found in some of the slimmest upcoming smartphones. The Snapdragon 810 is also Qualcomm's first hardware implementation of the 4K H.265 video encode, which produces superior 4K video without increasing file sizes.

If your future 810-equipped smartphone doesn't come with an SD slot to add more storage space, you should still be able to film plenty of 4K material.

An improved display engine supports both internal 4K screens, as well as external 4K screens such as TVs. Improvements to the modem and support for 4G CAT 9 LTE and next gen 802.11ad wireless connections will help stream and share your creations as well.

Will the Snapdragon 810 usher in glorious 4K future for smartphones? Qualcomm certainly hopes so.