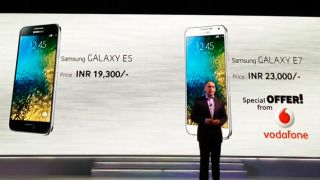 Mid-range blowers on the way

We've been hoping for ages that Samsung would finally start producing good mid-range and low-end phones again, and that's what the Galaxy E5 and E7 seem to be for.

They offer 5-inch and 5.5-inch screens respectively, but cost a good deal less than Samsung's other large-screen phones.

This area marks a big weak point in Samsung's phone line-up, so it would make sense for these phones, or similar ones, to branch out of India.

Both phones have 'HD' screens, and while Samsung is yet to be explicit about the exact resolution, it seems likely to be 720p rather than 1080p. Regardless, they're an important upgrade over phones like the Galaxy Ace 4.

Aside from screen size, the Samsung Galaxy E5 and E7 are fairly similar, with 64-bit Snapdragon 410 processors, 2GB of RAM apiece and 8/5MP cameras. They have solid selfie skills.

One key difference is battery size. The Samsung Galaxy E5 has a 2,300mAh battery while the E7 gets a larger 2,900mAh unit to compensate for the larger screen.

While these phones do not appear to be on the list for a showing at CES 2015, it seems possible we'll meet them at MWC 2015 in February.