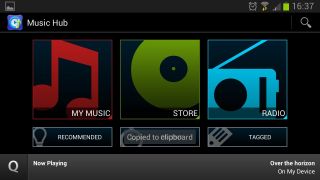 The Samsung Hub digital store on the firm's range of smartphones and tablets might be on the way out, according to a top Samsung marketing executive.

The in-house portal offers the firm's range of bespoke applications as well as access to popular content like games, music and movies, making it a competitor to the Google Play Store.

With rumours that Google asked Samsung to stop launching so many 'gimmicky' apps for its Galaxy devices, it appears the company may have taken heed, starting with the annexation of Samsung Hub.

While it's not clear when the company will drop the portal completely, the groundwork was already laid with the recent Galaxy S5 launch. On that handset, Samsung Hub was not present out of the box.

The store's only real use for Galaxy fans is the ability for users to sync content downloads across multiple Samsung devices, but that aside, it's unlikely many users will miss Samsung Hub.

Whether this will mean Samsung will tone down its constant endeavours to separate itself from the rest of the Android pack remains to be seen.