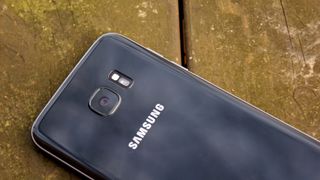 Yesterday a huge chunk of Samsung Galaxy Note 7 information leaked out and today even more has arrived, this time joined by press photos, along with details about the new Gear VR.

The information was shared on Nowhereelse.fr by reputable leaker Steve Hemmerstoffer, aka @OnLeaks, so as sources go this is a good one.

He claims to be able to "confirm" that the Note 7 will have a similar design to the Samsung Galaxy S7 Edge, with a metal frame and glass back, as you can see in the press render, and that it's IP68 certified dust and water resistant.

The specs apparently include a curved 5.7-inch QHD Super AMOLED screen, a 2.3GHz octa-core processor, 4GB of RAM, Android 6.0, a 12MP rear camera with optical image stabilisation, a 5MP front-facing camera, a USB-C port, both fingerprint and iris scanners, a 3500mAh battery and 64GB of storage, plus a microSD card slot.

Familiar specs but a new headset

While the processor isn't named the specs suggest it's the same Exynos 8890 chip as used in the Galaxy S7 in some regions, though it's possible that as with that phone the US will get a Snapdragon chip instead.

Otherwise the specs are largely the same as we've heard before, though that 3500mAh battery is worth highlighting as that's smaller than even the Galaxy S7 Edge's 3600mAh juice pack. Though it's significantly larger than the Note 5's 3000mAh battery, so it may still have a decent amount of life.

The S Pen's pressure level has apparently been doubled from 2048 on the Note 5 to 4096 here and it's said to have a latency time of less than 50ms, all of which should bring it one step closer to feeling like a real pen.

The leak also details the new Gear VR, which is apparently 207 x 122 x 98.5mm and 300g, making it a little lighter than the current 318g Gear VR. The field of view has also apparently been increased to 110 degrees from 96 degrees and it uses USB-C as expected.

That new Gear VR is supposedly going on sale next month, but according to the leak you won't be able to buy the Samsung Galaxy Note 7 until September, at least in France, where it will apparently retail for around 850 euros (roughly £715/US$945/AU$1258).