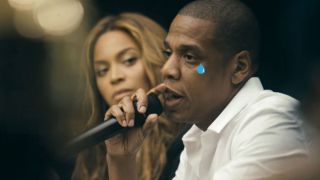 Tidal, possibly the hottest topic in tech a month ago, seems to have flailed around in the ocean for a few weeks and is now sinking to the bottom of the app charts.

Jay Z's newly relaunched music streaming service has just dropped out of the top 700 apps on iPhone in the US and doesn't show any signs of stopping.

It doesn't seem any easier for Tidal in the UK either – the app no longer sits in the top 500 of the iOS and Google Play Store charts.

Tidal received a lot of media attention after Jay Z, Beyoncé, Kanye West, Madonna, Daft Punk, Jack White and a load of other big names all convened in a room to launch the new service – but it seems the service hasn't managed to transfer the initial hype into subscriptions.

Spotify must be breathing a big sigh of relief as it sits at number 8 in the UK iOS charts and number 6 on Android.

The US is a little different for Spotify though as it sits at eighteenth in the iOS charts and number 11 on Android, with Pandora still thrashing it in both download charts.