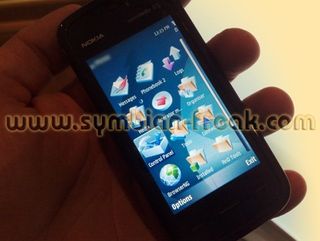 After Nokia’s iPhone rival got its name the other day, we were rather taken aback. We learnt at Mobile World Congress that touch was very much on Nokia’s agenda, but we didn’t expect details of a device.

That was because Niklas Savander, head of Nokia's Services and Software division, said the company was definitely "platformising touch," meaning that it would be available across the range on a version of the S60 Symbian OS rather than being chained to a particular device.

So could the Tube be the cheap answer to the iPhone? Well, perhaps, but it depends on how badly Nokia wants this phone out there. One thing seems clear, the Tube will be the first in a line of touch devices from Nokia. Noises coming from across the web seem to indicate that the Tube itself won’t be an iPhone killer boasting a myriad of functionality, though that will follow soon after.

The early pictures of the Tube (from Symbian Freak) remind us a little of a more rounded LG Viewty, though hopefully it won’t remind us of its abysmal user interface.

When will it be with us? It’s possible that it could debut later this year, perhaps even in the autumn. It certainly would in an ideal world, since by the time next year’s Mobile World Congress rolls around in February the iPhone will have been around for two whole years.

Rumours also seem to suggest that the screen won’t be multi-touch like the iPhone, but it seems unlikely that this could be predicted with any certainty. As for other tech on board, Wi-Fi, 3G and GPS are certs, though we also wonder if there will be room for HSDPA high-speed broadband. This may well continue to be a business-orientated option however, and so not available in the Tube which looks destined to be a consumer-facing device.

It’s also rumoured that the Tube won’t have much in the way of onboard memory, but that it will have a card slot (perhaps an SD variant) for memory expansion. One of the early images also shows a stylus, but perhaps this is for size comparison.

The handset will support Java as well and enable uploading of content such as geotagged photos – almost certainly to Nokia’s new Ovi portal.

And the Tube also seems to have a 16:9 widescreen that may even be bigger than the iPhone’s 3-inch display – though hopefully this won’t mean added bulk.