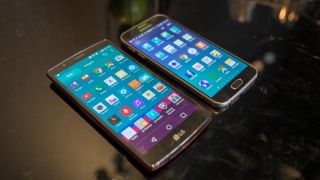 It's a superphone showdown

The Samsung Galaxy S6 isn't a perfect phone, but with its combination of a stunning design, a great screen and a brilliant camera it is the best phone in the world right now; though, you never know, that may change when we review the LG G4.

With a stylish new design of its own, plus a top-end screen and a great camera, the LG G4 seems prepared to go blow for blow with Samsung's best. So how do these two superphones really compare? Let's find out.

The leather-backed LG G4 can't help but stand out from the crowd, as it's a more unusual material choice than the metal and plastic found on most smartphones. Adding to its slightly unusual appearance is a gently curved back and screen, which is undeniably premium, but also large and heavy at 149.1 x 75.3 x 8.9mm and 154g.

The Samsung Galaxy S6 has a more conventional, but no less stylish, design, with a metal frame and glass back. The glass looks good, with an almost gemstone-like quality to it, though it can be a fingerprint magnet.

At 143.4 x 70.5 x 6.8mm and 136g it's smaller, lighter and a whole lot slimmer than LG's latest. The smaller size is arguably a good thing and the slim build certainly looks good but it comes at the cost of a smaller battery.

The Samsung Galaxy S6 in comparison is apparently 110% compliant according to LG, with more oversaturated and less natural colours, though the S6 doesn have the ability to tone down that effect.

Given that the Galaxy S6 beats even Snapdragon 810-packing devices in benchmarks it seems likely that it's a more powerful phone than the LG G4, but it's not always that simple, as elements like the UI can play a big role in how laggy the response is under the finger.

In any case they're both very powerful handsets and both have 3GB of RAM, allowing them to multi-task effectively too.

Both Samsung and LG have put a lot of work into their flagship's cameras. The LG G4 has a 16MP rear camera with OIS 2.0, which is supposedly better than older optical image stabilisation modules. It also features laser autofocus for speedy focusing and it has an f/1.8 lens aperture, allowing it to capture a lot of light.

The Samsung Galaxy S6 also has a 16MP camera with optical image stabilisation, though from what LG is saying its version of OIS may be better. Samsung's camera won't likely fare as well in low light either, as it has an f/1.9 lens aperture.

Having said that the Samsung Galaxy S6 is no slouch in poor lighting, so we'll have to see how the G4 compares in practice.