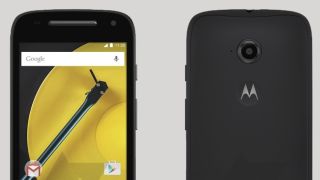 Last year's Motorola Moto E was a fantastic little budget phone that impressed us a lot, and it looks like Motorola is already planning a new and improved iteration of the handset.

A new set of renders, published by the Android Police website, claim to show what a second generation Moto E would look like.

According to these renders, the second generation Moto E will again sport a rear camera with no flash, as well as a small screen. Other rumours have pegged this display as a 4.5-inch screen running at a 540 x 960 resolution.

On the front of the alleged second generation Moto E, the mock up shows a version of Android that looks like Android 5.0 Lollipop.

Although the operating system has yet to be confirmed, we should be seeing new handsets in 2015 launching with the latest version of Android, so this could well be accurate.

It also looks like the second gen Moto E will include a front facing camera, something that the original model did not have. Hopefully we won't have long to wait until Motorola gives us more information about its upcoming budget handset.