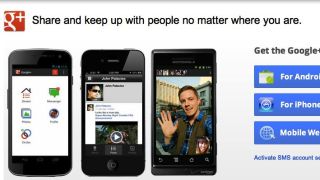 The Google+ app update for Android packs an exclusive feature

Google has given the Google+ app a much-needed overhaul on the company's Android OS, and though it comes weeks after the iOS version's update, it also brings an extra feature.

The Google+ app for Apple's iOS was given a visual retooling earlier this month, and at the time Google promised that an Android equivalent to the 2.0 update was incoming.

Today, they've delivered in spades. The new Google+ app for Android features the same aesthetic improvements as the previous iOS update, as well as the added functionality to initiate Hangouts directly from the app.

Android users previously had to open a separate "Messenger" app to start a new Hangout, although existing Hangouts could be joined from Google+.

Now it's all under one app.

But the Google+ 2.0 app brings a host of pleasing changes.

The fonts are crisper and the images are larger, and the Google+ stream has been made easier to navigate.

Media within the stream now takes up more of the screen, making it easier to view images and videos, and the +1 button is prominently featured.

"Our overall goal is to create a consistent, beautiful and simple experience for all mobile Google+ users," a Google spokesperson told TechRadar when the iOS version of the Google+ 2.0 app was released.

"We aim to get new updates for our mobile apps in the hands of users as quickly as possible."

"Sharing is deeply sensory. From cooking a favorite meal to getting together with friends, it's the smells and the stories and the smiles that make human connections so essential.

"With Google+ we want to extend these moments online, so it's only right to focus on the most personal of personal computers: your mobile phone.

"To be clear, we're not interested in a mobile or social experience that's just smaller. We're embracing the sensor-rich smartphone (with its touchable screen and high-density display), and transforming Google+ into something more intimate, and more expressive.

"Today's new iPhone app is an important step in this direction - toward a simpler, more beautiful Google."