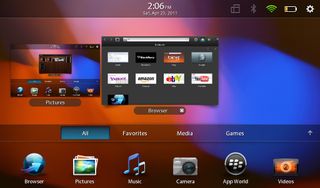 QNX on a phone is still a long way off

An analyst has suggested that RIM's range of QNX-loaded smartphones has been "delayed" until the tail end of 2012.

Peter Misek, an analyst at Jefferies and Co, has begun telling clients to expect the QNX range to launch late in 2012, describing this as a delay despite the fact that RIM is yet to announce an official timescale for the new line-up.

In a note to investors, Misek wrote, "We continue to believe the story hinges on QNX, which we believe will be delayed to [the second half of 2012] vs. guidance of early CY12.

"Channel checks indicate that in spite of RIM's best efforts, QNX handsets are still likely to arrive in [the second half of 2012]."

This supposed "delay" means that we could be stuck with the current crop of BlackBerry OS 7 handsets, including the BlackBerry Bold 9900 and BlackBerry Torch 9810, for over a year – which would be far easier to swallow had the OS update been a more major event.

As it is, we're not seeing any massive improvements other than some speed increases, a better browser, some redesigned icons and an improved notifications system.

RIM has stayed very quiet on the subject of exactly when its next generation QNX-running superphones will launch, a line it is developing alongside its BlackBerry PlayBook tablet offerings.

Whether the late 2012 launch is a real delay or not, RIM's next gen phones are certainly a good while off. The question is, will consumers wait that long?

Via Phone Arena and eWeek