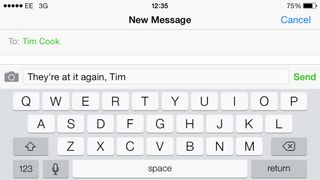 iMessage bug has been prominent as far back as 2009

Apple has finally piped up over a long-standing iMessage issue which has resulted in former iPhone users who have switched to Android or Windows Phone failing to receive texts sent via the service.

This weekend it was revealed the firm is facing a lawsuit over the issue. Senders were being informed their messages were delivered, but in reality they were being sent into a SMS black hole from which they never returned.

Recode reported that a recent sever glitch at Apple made the problem worse for some. That has now been resolved, according to Cupertino, but the problem seems to be persisting for some users.

In a statement, the company pledged to launch a fix in a forthcoming software update.

A spokesperson told Recode: "We recently fixed a server-side iMessage bug which was causing an issue for some users, and we have an additional bug fix in a future software update."

The issue stems from Apple's inability to register when a mobile phone number previously associated with an iPhone has left for pastures new.

Instead of sending a regular SMS text message through cellular networks, it continues to attempt delivery through iMessage's web-based system.

For users experiencing the problem, a temporary fix can be had if they deactivate iMessage and remove their phone number before switching their number to the new platform. However, this isn't of much help to those who've already left the Apple ecosystem.