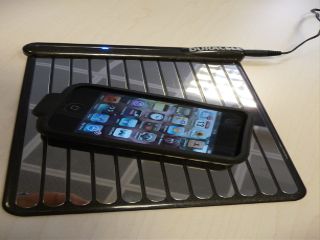 Duracell myGrid - finally coming to the UK in September

It's been a long time coming for the Duracell myGrid. Originally slated for an August 2009 release, the wireless charging device has finally made it to the UK a year later and TechRadar has managed to get a close look at the thing.

Though similar in looks to its rival, Powermat, myGrid uses conductive (rather than inductive) charging strips that enable up to four devices to be placed anywhere on the mat.

It can handle a variety of electronic gadgets and ships with a single Power Sleeve designed to fit your required device like a protective skin.

Power Sleeves are available for iPhone, iPod Touch, BlackBerry Curve and Pearl and you can specify which one is bundled at the point of sale.

Additional Power Sleeves can be bought for £19.99. Alternatively, there's a series of Power Clips included, enabling you to charge devices with other connections, including mini USB.

The ultra thin and lightweight myGrid charges at the same rate as plugging directly into the mains and automatically stops charging devices as soon as they are fully powered up.

And, thankfully, It is safe to touch with the hand or metal devices, such as keys - so there isn't a worry that this new-fangled tech will frazzle your brain.

In order to promote myGrid, Duracell commissioned RSA Films, Ridley Scott's ad agency, to make a special short film, so it looks as if Duracell has brought out the big guns to promote the thing.

The Duracell myGrid has a UK release date of September and will cost £69.99.