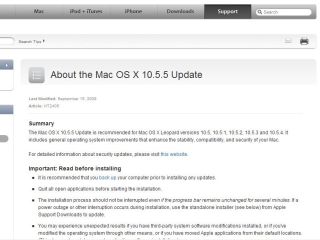 Mac OSX 10.5.5 has arrived bringing with it a whole smorgasbord of tweaks and updates.

On top of the usual security patches, the update has fixes for the likes of video playback stability, processor core idling and remote disc sharing for those privileged MacBook Air users.

The fault that saw some Mac users watch helplessly as their machine turned itself on at the same time every day has been corrected, and those with Palm OS devices will be delighted to learn that syncing should now be easier.

'Extensive graphics enhancements' are mentioned in Apple's update log, but not documented any further, but improvements to iCal and the address book will be welcomed.

Mac OSX users can also look forward to the now infamous MobileMe syncing better and more reliably, and Time Machine tweaks that should make the service more reliable and quicker.

A big update then, but it should relieve a few gripes for the OSX faithful.