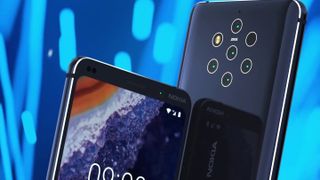 Nokia 9 PureView has been subjected to numerous leaks and rumours from the past couple of months. While it is speculated that HMD Global will announce the phone during its Mobile World Congress (MWC) 2019 press event, a new leak has revealed key design details of the upcoming smartphone.

As per a report by 91Mobiles, here's how the Nokia 9 PureView will actually look like.

These are some new press renders of the much-awaited phone which reveal that the Nokia 9 PureView will feature an 18:9 aspect ratio display. Bezels are present both on the top and bottom of the display housing the front-facing camera, earpiece and a set of sensors with the Nokia logo on the extreme right.

On the back, the renders showcase the five Zeiss cameras neatly packed in a hexagon shape along with a LED flash and a depth sensor. Interestingly, there is no fingerprint sensor on the back and neither is it present on the front of the phone. According to the report, the Nokia 9 PureView has an in-display fingerprint sensor which is a first for the company.

While the Nokia 9 PureView seems to feature regular bezels, the smartphone market is getting competitive with the launch of every new phone and along with it, their respective takes on reducing the bezels. Even Samsung had to resort using a waterdrop notch on its latest Galaxy M20 which is the first phone from the company which lets go of the front bezels and instead has a notch in place.

Seeing the renders, we can also expect the Nokia 9 PureView to have a slightly curved back panel which should allow for more grip while holding it in hand. The Nokia 9 PureView is rumoured to feature a 5.99-inch QHD+ (2960 x 1440 pixels) AMOLED display with an aspect ratio of 18.5:9, topped with a layer of Corning's Gorilla Glass. The display is expected to be HDR10 compliant.

Under the hood, the phone could be powered by top-of-the-line Qualcomm Snapdragon 845 with 6GB of RAM and 128GB of storage (expandable upto 512GB). On the front, there's a 12MP camera for selfies and powering the whole setup is a 4,150 mAh battery which supports both wireless and fast charging.