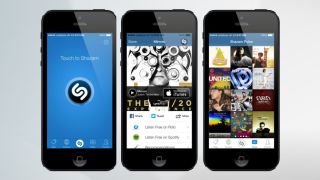 Here's a pairing we didn't quite see coming: Apple is close to buying Shazam, the music recognition app, according to a new report. The deal could be announced as early as Monday.

Apple and Shazam, which also identifies everything from TV shows and movies to ads, are signing paperwork this week and plan an announcement early next, sources tell TechCrunch. Plans to announce the acquisition could change, however.

Apple is known for buying up other companies, though Shazam is certainly no small startup. It gained popularity for its ability to recognize music and more through a snippet of sound, and can also identify items such as books and magazines through visual cues picked up through a device's camera. Shazam has even ventured into augmented reality for brands.

Shazam says over 100 million people use its app every month. While it's reportedly valued at over $1 billion, TechCrunch sources say Apple is buying it for much less. One source puts the price at around £300 million, which is about $401 million.

The move would make sense for Apple on a few fronts.

Shazam also has a feature that lets users see what popular artists are Shazaming, and this could conceivably make its way to Apple Music, giving users another way to connect with artists and discover new music.

Yet another area where Apple could stand to benefit is from Shazam's work in augmented reality. Apple has made a big push into AR recently with the launch of the iPhone X, iPhone 8 and iOS 11.

Shazam's ability to scan real-world objects and generate branded AR content looks to fit right in with where Apple wants to go. When you consider Amazon recently brought AR shopping to its iOS app, it seems only natural Apple will want to do something similar on its own.

Whether or not the Shazam deal goes through, Apple has historically shown its commitment to bettering its music services through big acquisitions. The company paid $3 billion for Beats in 2014, after all.

We'll keep our ear to the ground for any developments, including an official announcement from Apple and Shazam.