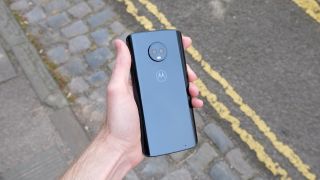 After three months of its global launch, the Moto G6 Plus is finally prepping to arrive in India. As per a teaser posted by the company on its Twitter, the Moto G6 will soon be heading to the Indian market and will compete against the likes of Redmi Note 5 Pro, Honor 9N and the Asus Zenfone Max Pro M1.

To recall, Motorola launched the cheaper Moto G6 and Moto G6 Play in India last month. Compared to these two, the Moto G6 Plus brings more value to table, especially in terms of hardware specifications and features.

In the shared teaser, Moto says, “It’s time to ask for more from your smartphone. Get ready to say hell tot he #MotoG6Plus, which is #BuiltForMore with a smart camera and serious performance! Stay tuned.”

It’s time to ask for more from your smartphone. Get ready to say hello to the #MotoG6Plus, which is #BuiltForMore with a smart camera and serious performance! Stay tuned. pic.twitter.com/2xtxPsq5PBJuly 26, 2018

Of course, the company hasn’t revealed the release date or any other information about the device as of now. However, looking at its international price, the Moto G6 Plus carries a price tag of EUR 299 (approx. Rs 24,070), which shouldn’t be the case for India, especially with worthy competitors offering similar hardware and features at a much cheaper price.

Considering the current crop of competing devices, the Redmi Note 5 Pro and even the Asus Zenfone Max Pro M1 are priced under Rs 16K mark. Moreover, we’re expecting the upcoming Xiaomi Mi A2 and the Nokia 6.1 Plus (Nokia X6) to be priced lower than Rs 20,000 too. Not just the price, but even the chipset on the global variant is Snapdragon 630, which is relatively inferior than the Snapdragon 636 present on the Note 5 Pro and Max Pro M1. So most likely the company might upgrade the chipset to SD 636 for Indian market.

The phone comes with stock Android 8.0 OS with minor tweaks on top, which Moto does on most of its phones. It has a 5.93-inch IPS display with full HD+ resolution having 18:9 aspect ratio. Although the bezels are still thick on the top and bottom, so don’t expect a truly bezel-less front on this one.

For optics, the Moto G6 Plus features a dual camera setup on the back having a 12MP primary camera with dual-pixel phase detection autofocus, f/1.7 aperture, 1.4-micron pixel size and a secondary 5MP camera. For selfies, it has a 8MP sensor with f/2.2 aperture and LED flash. Considering how Moto G4 Plus and G5 Plus has fared in the camera department, we could see the Moto G6 Plus repeating the same this time as well.

Moto has given a complete overhaul to the looks this time. In fact, the whole Moto G6-series has got a premium treatment in the design department, where the Moto G6 Plus replicates what we’ve seen on the Moto X4 previously.

A 3200mAh battery powers up the phone and it supports Turbo Charging. Moto usually bundles the Turbo charger in the box, so it’s likely to repeat the same on its key model.

We'll be keeping a close eye on further Moto G6 Plus announcements by the company. Until then, you can read our review of the phone (global variant) below.