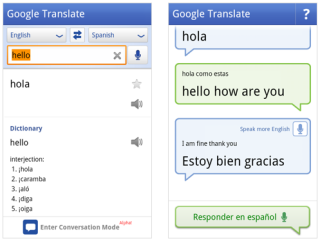 Google Translate for Android has been given an overhaul, with the latest version altered to make the 'app easier to interact with' and including an alpha version of a live conversation translator.

Google Translate for Android was launched a year ago, allowing feature like voice input and SMS translation.

And a year on, the app has been updated with several changes that should make things easier for users.

"Among other improvements, we've created better dropdown boxes to help select the languages you want to translate from and into, an improved input box, and cleaner icons and layout," explained product manager Awaneesh Verma in a blog post.

Perhaps more exciting is the inclusion of the beta of Conversation Mode, that should allow you to have stilted and machine imprecise conversations with bemused people near you.

At the moment that conversation will have to use Spanish and English, but it's an exciting look into the future of translation and the potential for near real-time translation, breaking down global language barriers.

"Currently, you can only use Conversation Mode when translating between English and Spanish," added Verma.

" In conversation mode, simply press the microphone for your language and start speaking. Google Translate will translate your speech and read the translation out loud.

"Your conversation partner can then respond in their language, and you'll hear the translation spoken back to you.

"Because this technology is still in alpha, factors like regional accents, background noise or rapid speech may make it difficult to understand what you're saying.

"Even with these caveats, we're excited about the future promise of this technology to be able to help people connect across languages."

The updated app is available for download from the usual places now.