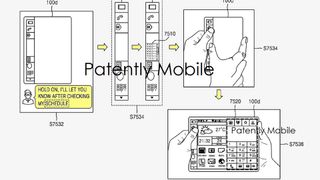 Sooner or later, someone is going achieve the holy grail of mobile computing and invent a phone or tablet that actually folds. Something with a screen that can be rolled up into a tube, for ultimate portability.

Samsung is clearly hoping it will be that someone, as the company has recently patented some intriguing ideas for how we might interact with foldable screens in the future.

PatentlyMobile reports on one recent filing, which proposes "a foldout design that offers an exposed tab allowing users to quickly choose a favourite app as they unfold/open their device".

So, for example, holding down the calendar icon on the spine of the device while you pull out the main screen would automatically launch the calendar app.

It shows some pretty forward thinking considering the technology to do this doesn't even exist yet. In the same filing, Samsung bizarrely includes drawings of a "foldable smartphone", in which the top half of the device droops over the bottom half – and both the front and back contain a screen.

It's hugely unlikely that any of these designs reflect anything close to a finished smartphone, and as is the case with most patents, it's probably just a case of Samsung essentially locking down an idea for itself, so that if Apple wanted to implement a similar interface on the iPhone 20, it'd have to cough up.

But still, it's an interesting glimpse of how the future could look.