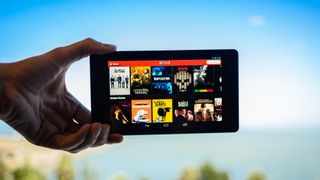 The Nexus 7 could be getting a slightly bigger sibling

The Nexus 8 tablet rumours just won't relent, but it's looking ever more likely that it might actually launch soon as some new pictures supposedly show the device.

The pictures were sent to MyDrivers.com and show the slate in a protective case.

Unfortunately this means that it's not really possible to make out and details of the tablet and rather hard to judge the authenticity of the images too.

However, the source who leaked them also claims that the Nexus 8 will have 3GB of RAM, run Android 4.5 or whatever the new version ends up being called, and perhaps most interestingly of all, will have a 64-bit Qualcomm processor.

This isn't the first time we've heard such a rumour but it is a big deal, as so far Android devices have stuck with 32-bit processors.

A 64-bit processor could lead to improved performance, however the main advantage is that it allows for support of over 4GB of RAM, which 32-bit processors don't.

So if the Nexus 8 comes with 3GB then a 64-bit chip might not have much effect, but it does suggest that Google is readying Android for 64-bit devices and raising the power ceiling on future devices.

In any case, if the Nexus 8 is finally on its way then it's likely to be announced at Google I/O at the end of the month, so we should find out all the juicy details soon.