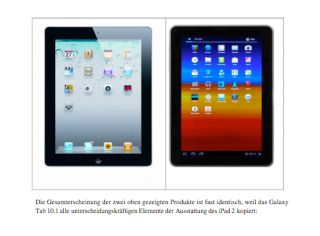 Apple used a doctored image of a Samsung Galaxy Tab 10.1 to make it look more like the iPad 2, in the court hearing which saw the rival tablet banned, reports have claimed.

Dutch website Webwereld.nl took a closer look at Apple's legal filing to the German court that barred the device from sale across Europe.

The site found a picture of the two devices next to each other and, in comparison, the Galaxy Tab 10.1 appears to have been doctored to make the aspect ratio appear more like the Apple iPad.

In the court fling, the Galaxy Tab's has been altered to give it an aspect ratio of 1.36 making it look much more like the iPad than it actually does.

The Webwereld site claims: "Apple and its lawyers have, perhaps inadvertently, misled the judge of a Düsseldorf court by filing flawed evidence of the similarity between the iPad 2 and Samsung's Galaxy Tab 10.1 tablets based on an inaccurate picture."

Apple made no mention of the respective aspect ratios of the devices during the hearing, which saw the Tab pulled from UK shelves following a strong opening week of sales.

Apple successfully convinced the German court of its claim that the Samsung Galaxy Tab 10.1 "blatantly copied" the iPad's form factor, UI and even the packaging.

Samsung, which was blindsided by the impromptu court hearing at which it did not have representation, is currently in the process of appealing the ban.

The company has a hearing on August 26th at which it will attempt to get the Tab back on to shelves across Europe.