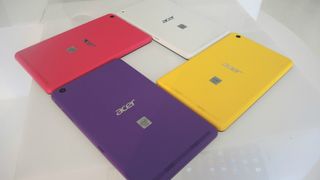 Acer's just unveiled some new tech for 2014, but CEO Jason Chen had something bigger to shout about at the company's New York event: Acer is changing its image.

Speaking to TechRadar, Acer's director of product marketing John Miedema outlined the company's plan a little more clearly, telling us that it'll be less about quantity with the focus instead on fewer, higher quality products.

"In 2008 we were very focused on market share and entry level products. Now we're stepping away from that," said Miedema. "We're walking away from the unprofitable stuff."

Moving away from reliance on PCs and entering areas like wearables with the Liquid Leap will be a big part of that, but the most important thing is changing the brand image.

Acer's plan, according to Miedema, is to chip away slowly with fewer products that are "a bit less techy" and more in line with the likes of Apple when it comes down to the user experience.

"In a blind test, people associate the Aspire S7 more with Apple than Acer," he said. "But still you'll see a lot of people not considering Acer or still buying the Apple product because it's Apple.

"This is somewhere we're [working on] slowly but steadily to gain a bit more credibility, a bit more brand value to be able to slightly enhance our product portfolio and occupy the higher price points."

Even sprucing up its Iconia One 7 with a bunch of colourful paints is a step in the right direction to a more friendly, less techy personality, but it's going to be a slow process to work up to those more premium devices, Miedema admits.

Right now everyone is "fighting for the 30 or 40%" underneath Apple and Samsung, and Acer is firmly in that battle.

"As much as we like to compete on anything else but price, the harsh reality is that this is the main factor being looked at."