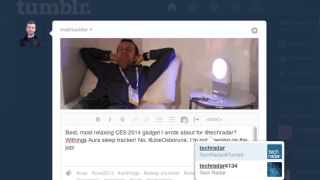 It only took seven years

Tumblr is coming up on its 7-year anniversary next month, so it's about time the social network added Twitter-style mentions.

The Yahoo-owned microblogging service now supports tagging other Tumblr accounts by first typing the "@" symbol followed by the person or organization's name.

A helpful dropdown menu does a good job of auto-completing the mention, and it thankfully works whether you're following the Tumblr account or not.

So far, the new mentions feature is limited to the web, as the Tumblr iOS and Android apps refuse to tag other accounts for the time being. The @ symbol just sits there.

Tumblr expects to roll out iOS and Android app updates with the ability to mention other profiles soon, but a company spokesperson didn't give TechRadar a more specific time frame.

But @dad, everyone's doing it!

Tumblr isn't the first social network to take a page from Twitter's mentions. Most notably, Facebook added the ability to tag friends in status updates back in 2009 and in comments in 2011.

This feature migrated to the Facebook-owned Instagram platform, too. Photo caption and comment mentions not only appear on the site, they actually translate to Twitter when posts are farmed out.

Google+ has its own tagging method. Instead of leading a friend's name with the @ symbol, the search engine giant enables everyone to tag people in their circles with the "+" symbol.

Tumblr is finally giving its 166 million blogs another way to stay connected besides sharing, reblogging and liking posts. It just needs to come to the apps to have real meaning in today's mobile-obsessed world.