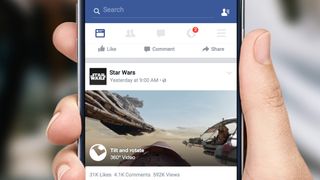 Facebook is on a roll, posting strong Q4 2015 financials and reminding us why it's the king of social media.

Let's start with video: we watch a lot of it on Facebook. CEO Mark Zuckerberg divulged that 100 million hours of video are viewed on the platform per day.

To that end, Zuck said Facebook is exploring "ways to give people a dedicated place on Facebook when they just want to watch videos" – perhaps hinting at a feature that could be a direct competitor to YouTube. Such a dedicated space has been discussed by Facebook before, but perhaps the firm is close to launching it.

Of the company's users, 500 million are viewing video every day. The company has created 360-degree videos, and is working to connect people with more videos they may be interested in watching.

It's clearly an area which Facebook is keen to keep growing, and we're sure to see more features around video appear, as well as bigger viewing numbers, as the year goes on.

COO Sheryl Sandberg spoke about the "shift to mobile" during the company's earnings call, and Facebook has the numbers to back it. Mobile daily active users on average for December 2015 hit 934 million, up 25% YoY, while monthly mobile actives reached 1.44 billion, up 21% YoY.

In all regions it tracks, ARPU was up year on year. So, while Facebook's user base is growing (largely in developing regions), it's also seeing a rise in how much it makes per user, primarily through advertising. Its ARPU for developing regions also grew YoY and quarter-on-quarter, meaning the firm can expect to earn more from users in those areas as time goes on.

Facebook Lite, a stripped-down version of the service designed for lower-powered phones, has 80 million users.

Facebook called its quarter "strong", and while it wasn't record smashing like Apple's latest, it bodes well for the future of the social network, which is about to turn 12.