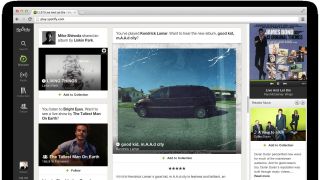 With over 5 million paying customers and more than 20 million active users, Spotify has announced some major changes to its music platform.

The music streaming service is still trying to solve the problem of music discovery, which – although it says its app platform announced last year is doing brilliantly – is still a big issue for Spotify.

So to try and help users find more music to listen to, Spotify has added a new recommendations engine that is part-algorithm-part-friend-powered.

Its new 'discovery' tab will feature a kind of news feed with suggestions of artists you might want to listen to with context added in for you – "You've listened to x and y so you might like to try z" as well as a short bio and album art.

Artists can now run fuller profile pages (that you can 'follow') and publish new playlists that will show in the discovery tab feed.

You can also 'follow' bloggers, celebrities and people you know are cool but you don't really know to plagiarise their music tastes and pass them off as your own.

Excitingly, Spotify will now also send out push notifications when an artist you're following adds new tracks and albums to the library.

For example, if you're following Metallica you would get a massive notification today telling you that the band's back catalogue is now on Spotify – and all you'd have to do is swipe the notification to start listening.

The other update that will change how people listen to music on Spotify day-to-day is the ability to add a song or album to your general collection rather than needing a specific playlist.

The new 'audio preview' feature will also let you listen to a snippet of a song without losing the track you're currently playing.