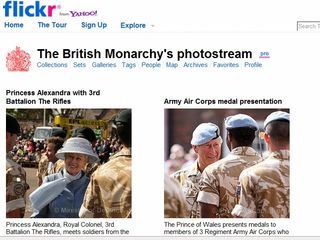 Keen royal-watchers will be kept abreast of the Queen's official engagements, as well as those of other Royal family members, with plans to update the royal Flickr account with pics on a regular basis.

Buckingham Palace has also posted numerous pictures of recent royal events, as well as archive pictures of the Queen, the Prince of Wales and other members of the Royal clan.

From Victoria to Elizabeth

Over 600 photographs have been added to the British Monarchy's Photostream account.

The Flickr account features new pictures from an exhibition 'The Queen's Year' which opens next week at Buckingham Palace.

The Flickr account has been divided into two categories – the Royal Collection, which contains the new exhibition pictures and pictures of all the Queen's children and grandchildren growing up, and the Victorian pictures.