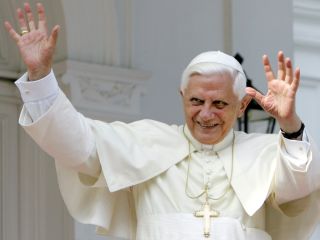 The Pope brags about the number of Facebook friends he has

After extolling the virtues and risks of an online presence, Pope Benedict wrote, "I would like then to invite Christians, confidently and with an informed and responsible creativity, to join the network of relationships which the digital era has made possible."

The Vatican's intention is, of course, that young people use the networks to spread the Gospel, not just for a spot of innocent pre-marriage poking.

Spreading the virtual Word is all well and good, but, like many psychologists before him, the Pope also warns against "excessive exposure to the virtual world" and the dangers of creating an online persona.

"It is important always to remember that virtual contact cannot and must not take the place of direct human contact," he argues.

"Entering cyberspace can be a sign of an authentic search for personal encounters with others, provided that attention is paid to avoiding dangers such as enclosing oneself in a sort of parallel existence, or excessive exposure to the virtual world."

It's not the first time the Vatican has got all 21st century on us; the Pope already has Facebook and iPhone apps, and has welcomed the site's popularity in past missives.

Today's social networking homily comes on the feast day of Saint Francis de Sales, patron Saint of journalists – a breed that is already well-versed in using social networks to gain