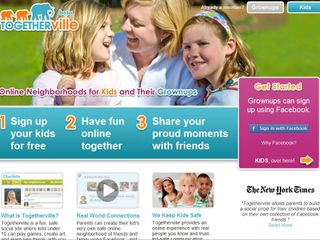 Teach kids the basics of safe social networking with Togetherville

A new social network aimed at training six to ten-year-old children how to effectively and safely use social networks has been launched in the US.

Togetherville is a social networking site for children to use, under the watchful gaze of their parents (or their friends' parents).

The project is the brainchild of Mandeep Singh Dhillon, who wanted to teach his son, Zoraver, how to share photos and more with relatives and friends online.

He didn't want to let his son loose on Facebook, however, so the result was to make a social network of his own. Which is where the original concept behind Togetherville was born.

Togetherville is for children to use with the help and guidance of their parents. The site has been in private beta for some months now and has now finally been opened to the wider public.

Togetherville lets children learn to navigate an online social network in what is described as "a semi-private environment." The kids can also play games, collaboratively work on art projects, share videos and choose pre-selected comments to make about their friends – the key being that all the content on the site has been vetted by responsible parents beforehand.

"We teach kids from a very early age, never let your identity be online, never let anyone know who you are, but we're teaching some bad things," Mr Dhillon told The New York Times. "Kids don't learn how to be accountable."

Vicky Rideout, a researcher from the Kaiser Family Foundation, is critical of the aims of the project, claiming that there is no data which suggests a demand from children under 10 for more access to online social networking.

"From the child's perspective, I'm not sure what the benefit is," said Rideout. "Kids will learn how to use technology and media when the time comes."