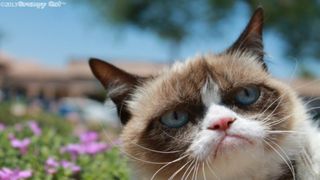 Good, now the whole world can know how much I hate them

Grumpy Cat, also known by her real name of Tardar Sauce, is clawing her way to Hollywood fame with her very own movie, with Deadline reporting that production company Broken Records is planning make a "big family comedy" based on the angry internet meme.

Grumpy Cat will be granted the power of speech for her Hollywood role, no doubt spitting vitriolic criticisms and making snide asides as she goes about hating everyone.

No one wants another Garfield, but is it wrong that we can actually see this one working?

Turn that frown around with some of our more optimistic blips